A PRIMITIVE MODEL OF FRUITFUL ECO-ECONOMY FOR THE WORLD

The country of Bhutan, nestled in the majestic Himalayas, is a country in transition, its air is clean, its forests are largely intact, and its wildlife are abundant and diverse. About the size of Switzerland, Bhutan has a population of only 700,000.

In Bhutan, land is distributed relatively equitably so that landlessness and poverty are rare. Today,

90% of the people live in rural areas, mostly on small farms where they grow corn and rice to feed their families. They use draft animals to pull their plows. Although most basic needs are met, infant and maternal mortality rates are among the highest in the world, largely due to a lack of medical facilities and clean water. Additionally, 70% of the population is illiterate.

Bhutan’s 37-year-old monarch, King Wanchuk, wanted to improve the condition of his people. To do this, he realized, Bhutan could have followed the economic development strategy of nearby countries, which have paid little attention to the environment. In neighboring India and Nepal, the results of this approach are painfully evident: The forests are severely overcut, much of the soil is eroded, and more lives have been impoverished than improved. These examples and factors discussed below convinced Bhutan to follow a sustainable path, one that would sustain human progress not just in a few places for a few years but for the entire country into the distant future.

In May 1991, the king said, “We would like to develop rapidly, but we would also like to ensure that there is a certain amount of harmony between rapid development and our culture and environment.” Fortunately, culture and environment are closely linked in Bhutan. The religion of Buddhism, practiced by many of the nation’s people, dictates respect for the environment. In fact, some think that the practice of Buddhism in Bhutan is one reason the natural environment is still largely intact. 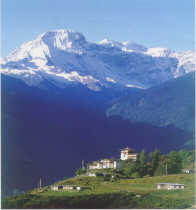 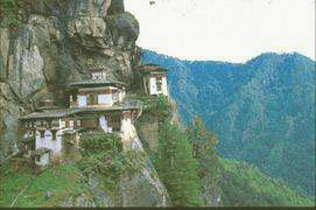 Today, 64% of Bhutan’s land area is covered by forests. When it came to the government’s attention that forest resources were being overcut in some areas, officials responded by nationalizing most logging operations. In 1985, the government enacted a National Forest Policy, which made the conservation of forests a top priority and economic considerations secondary. This policy, designed to ensure that 60% of the country remains forested, requires that the rate of tree harvesting be equal to the rate of replanting. To preserve part of the forests, the government of Bhutan has set aside more than 20% of its land in ten reserves. The Royal Manas National Park covers 45,000 hectares (165 square miles) and provides sanctuary for many of the endangered species of south Asia. Elephants, golden languar monkeys, tigers, wild buffalo, and more than 500 species of birds can be found in

In 1990, Bhutan’s highest officials passed the Paro Resolution, a call for a national sustainable development strategy. It recognizes that the key to sustainable development is to find a path that will allow the country to meet the needs of the people without undermining the natural resource base of the nation. According to the agreement, new industries, new agricultural markets, and new forestry products need to be carefully developed with respect to the environment.

Development in Bhutan is slated to proceed slowly and to be based primarily on renewable resources, among them hydropower and solar energy. Officials see hydropower as the country’s largest source of potential earnings. Today, most rivers still run free in Bhutan. The largest dam in the country produces $25 million worth of electricity, which is sold to India. It also supplies power to approximately 23,000 families in and around Bhutan’s two largest towns. Bhutan hopes to build more dams in the future with financing from the World Bank. Aimed at increasing export income, these projects will be built only when the king and his advisers are sure that such prospects will cause minimal environmental damage.

If the goal of development is to improve the lives of people, a better alternative might be photovoltaics, which produce electricity from sunlight. Used to power thousands of isolated farms and villages, photovoltaics could provide a sustainable supply of energy for local needs without having to dam the nation’s rivers. Unfortunately, foreign funding sources for this approach are scarce, so photovokaics are not being aggressively pursued by the government at this time.

Bhutan has also begun to develop extractive industries. In the north, the conifer forests are selectively harvested by the government-owned Bhutan Logging Corporation. In the south, a joint government-private company operates a large plywood plant. The company is allowed to clear-cut hardwood forests in the area as long as it replants.

Bhutan has also opened its borders to tourists but limits the number to 1500 to 2000 per year. To limit the impact of tourism, those allowed into the country must follow a strict, government-set itinerary.

To deal with its rapidly growing population and fears that it will have to increase grain imports more than the current 10% to feed its people, the nation hopes to limit the growth rate of its population to 2% per year in part by limiting families to two children. Contraceptives and family planning advice are available in 70 clinics across the country.

If industrialization is allowed to progress too far or too rapidly, the Bhutanese government knows that it is likely that natural resources will be irrevocably destroyed and people impoverished. Rapid economic growth may be accompanied by growing inequality, which could tear the social fabric of the country. Increasing consumerism may lead to the pursuit of narrow economic goals.

The country of Bhutan has the option of creating a prosperous and sustainable society from scratch. Few countries have such a choice. A fundamentally sustainable course is already in place. Environmentally damaging infrastructure and polluting industries have not been developed. The country is not hindered by debt as many other nations are. Its cultural values remain strong and intact. Income is evenly distributed. There are few economic or ethnic tensions. Moreover, the government has strong convictions about sustain-ability and has not been corrupted by business interests. 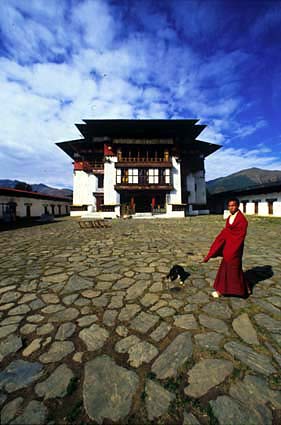 Even with such strong convictions, the road to sustainability will require constant vigilance. Most think that the effort will be well worth it. As World-watch Institute’s Christopher Flavin notes: “It will involve a process of continual adaptation and change, preserving what is best in Bhutanese society while improving living standards and protecting the natural resource base on which the country depends. Such an endeavor would truly make Bhutan a model for the world.”