Darwin is basically right, though only to some extent, that species and individuals compete, fight, kill, and survival belongs to the fittest. This is one of the most important mechanisms by which life evolves and maintains its quality. As the human society builds upon and is an extension of the ecosystem, does it mean that for the human society to work well, man must apply this mechanism to her/his society also; say, let those who are not skillful enough to land a job starve to death?

We may be enlightened with respect to this question through the examination of evolution in an ecosystem in comparison to the human history. Taking the maritime swamp land as an example, the mangrove species kandelia candel competes successfully over other mangrove species and dominate the area chiefly through the evolution of droppers that other species do not have. The seeds of kandelia candel germinate and grow into seedlings inside the droppers before leaving their mother plant body and when the droppers still hang on the branches of their mother plant. The dropper's shape is like a pen, with a sharp and heavier lower end. So when it ripens, it drops and inserts itself together with the seedling into the mud below as a result, and the seedling can get hold of the ground, start to tap the much fresher water under the mud surface. This adaptive evolution of droppers enables kandelia candel to have a much greater successful rate to propagate its young plant onto the mudflat. Seeds of other mangrove species just find it difficult to locate a suitable site for them to germinate on the all too salty mud surface. 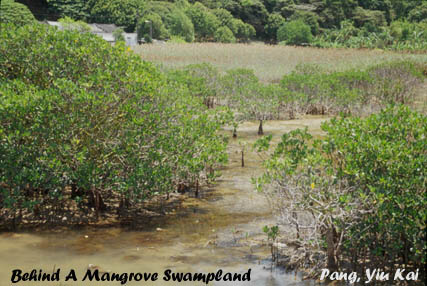 When it is the industrial society that dominates a place, it always exploits resources from the land, drains out nutrients from the soil and plays environmental havoc to the place as a result of stupid human intelligence and selfish human manipulation. But when the mangrove dominates a mudflat, millions of Nature evolved complex mechanisms come together with it, say, it taps water, minerals from the mud and then let them combine with carbon dioxide in the air to form the building materials of its plant body first through the process of photosynthesis and then through the synthesis of various organic matters. This process greatly increases the biomass of the mudflat while the fallen leaves and branches turns back more nutrients to the mud than the mangrove has tapped from it. The effect of this nutrient regeneration together with the standing mangrove on the mudflat ends up providing much better and more diverse living environment for more land, water and air species to dwell in, even for other competing mangrove species.

When different races of man compete to dominate the earth, the end result is completely opposite in sense. One of the means they evolve are more and more powerful weapons, some of the human races also evolve droppers like kandelia candel, but those droppers are droppers of nuclear bombs or simply nuclear bombs themselves, which are all life destructive when used.

Animals never burn up a forest, or practice fighting skill twelve hours a day in order to defeat their competitors, they just let Nature cut out the weaker or less fortunate portion of their species, or that their species simply cannot survive in the first place. On the contrary, man can work round the clock, and exhaust all natural resources just to defeat their enemies, whether militarily or commercially,  as we can all see in our modern societies. Such practice generates quite some grave problems:

First, it pushes human activities into a very narrow goal of defeating their enemies militarily as well as economically.

Second, all the available time, energy and resources of an individual as well as the society are exhausted by the competition, very little is left to other activities,  so nearly all man suffer very much in the process and countless new problems besiege modern societies.

Third, as all participants input as much time, energy and resources as can be exploited by them, the marginal utilities of such excessive inputs shrink to zero even though the efficiency of nearly every particular production has been greatly increased as can be comprehended from the law of diminishing return. In other words, most of these inputs are wasted. Such effort creates a lot of waste and exhausts all resources as a result.

We should also view how man should conform to Nature in such a way that man find having to compete for survival sufferous, in fact this is Nature's way of telling man how to act. If only man could listen to this internal guidance, both man and the ecosystem could live much happier.

So, making the human society Darwinistic is no conforming to Nature, but living in peace (both militarily and economically) with other man is.